What does docker runtime deprecation in Kubernetes mean for Developers?

Kubernetes is deprecating Docker as a container runtime after v1.20. 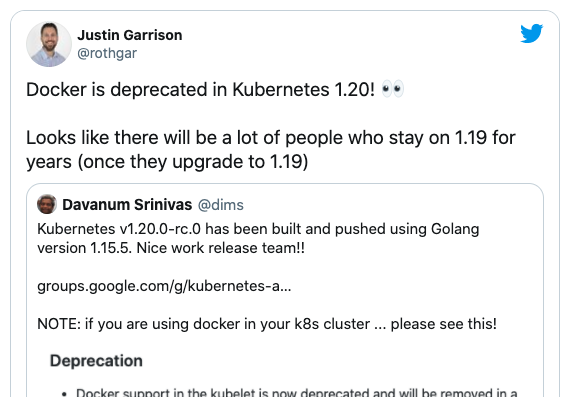 At v1.20, you will get a deprecation warning for Docker. When Docker runtime support is removed in a future release (currently planned for the 1.22 release in late 2021) of Kubernetes it will no longer be supported and you will need to switch to one of the other compliant container runtimes, like containerd or CRI-O. 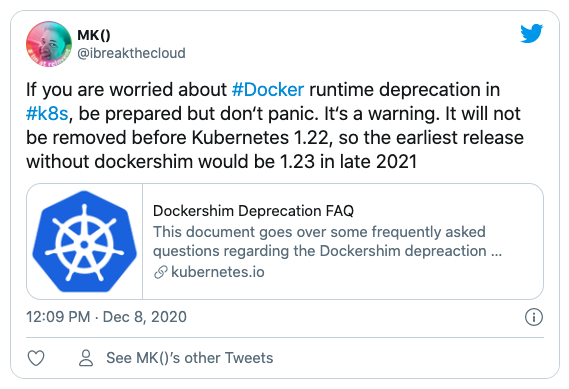 But this will not affect application developers using Docker desktop or Docker for Mac to build and run their images.

This change is for Docker runtime inside the Kubernetes cluster and is different from the docker used during development.

The image created by docker during development or CI pipeline is not specific to docker, but it’s an OCI (Open Container Initiative) compliant image.

So for now as a developer you would be able to continue:

There is one important piece that will break for you as a developer if you are using Docker-in-Docker construct with your CI tool running on Kubernetes. There are lots of opinions on this pattern, and we prefer to use an alternative utility called kaniko as it does not require privileged access by the CI container. There are other utilities out there as well like img and buildkit to accomplish image building within containers running on Kubernetes.

Kubernetes is an ever-evolving project and story, thus nobody is 100% expert on it. With flexibility, it brings the complexity to run the apps and the peripheral integrations with it. Thus here at initializ, our goal is to make running your Apps on Kubernetes as easy as possible while providing you the ability to integrate with your favorite cloud-native services.

You can contact us to try our development platform for free.

Blog also published on medium.com at: Link. Subscribe to us on Medium.
We use cookies on our website to give you the most relevant experience by remembering your preferences and repeat visits. By clicking “Accept”, you consent to the use of ALL the cookies.
Do not sell my personal information.
Cookie SettingsAccept
Manage consent

This website uses cookies to improve your experience while you navigate through the website. Out of these, the cookies that are categorized as necessary are stored on your browser as they are essential for the working of basic functionalities of the website. We also use third-party cookies that help us analyze and understand how you use this website. These cookies will be stored in your browser only with your consent. You also have the option to opt-out of these cookies. But opting out of some of these cookies may affect your browsing experience.
Necessary Always Enabled
Necessary cookies are absolutely essential for the website to function properly. These cookies ensure basic functionalities and security features of the website, anonymously.
Functional
Functional cookies help to perform certain functionalities like sharing the content of the website on social media platforms, collect feedbacks, and other third-party features.
Performance
Performance cookies are used to understand and analyze the key performance indexes of the website which helps in delivering a better user experience for the visitors.
Analytics
Analytical cookies are used to understand how visitors interact with the website. These cookies help provide information on metrics the number of visitors, bounce rate, traffic source, etc.
Advertisement
Advertisement cookies are used to provide visitors with relevant ads and marketing campaigns. These cookies track visitors across websites and collect information to provide customized ads.
Others
Other uncategorized cookies are those that are being analyzed and have not been classified into a category as yet.
SAVE & ACCEPT